It came after earlier claims that the Hammers had ‘authorised intermediaries’ to find out about the player’s situation at Basel. At the same time, a report came from Switzerland, explaining just what a a bargain Cabral could be, with it thought he’ll be available for €20m or less in the winter market.

That sounds a great deal, especially when it’s considered he’s scored 25 times already this season, and added eight assists. At just 23-years-of-age, the striker is also a player who could grow in value in the coming seasons.

At the weekend, Goal Italia reported they’d been informed Barcelona, prompted by West Ham’s action, are now willing to pay €15m for the South American.

That isn’t backed up in Monday’s edition of Catalan newspaper Sport, who simply present Cabral as an option and cover his impressive figures, with much more attention being given to Ferran Torres, and Anthony 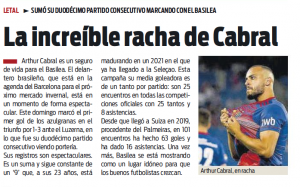 Without Barcelona moving forward, West Ham look well placed for the signing, and there’s nothing stopping them moving forward to speak to Basel ahead of January.