His form has not gone unnoticed as he is attracting interest from the Premier League, according to today’s edition of French newspaper L’Equipe.

It’s claimed West Ham United are interested in the 22-year-old Celtic player. Manuel Pellegrini’s side have ‘in the past few hours’ made contact about signing the player.

Ntcham’s current deal with Brendan Rodgers’ side will run down in 2021.

Manuel Lanzini is one of the players in the attacking midfield positions at West Ham. In June he suffered a serious knee injury in training while on international duty with Argentina, ruining his chances of appearing at the 2018 World Cup. 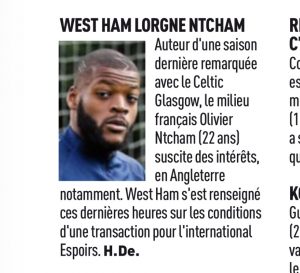 A few reports suggest he could miss the whole of next season. Whilst the Celtic player certainly wouldn’t be a like for like replacement, Ntcham would provide another option in the middle of the pitch and help allow the more attacking players West Ham have signed to flourish.