It had been a while since a Premier League club last got linked to Sporting goalkeeper Rui Patrício. But with the summer window approaching, the rumours are back with full force.

Claims Napoli are in negotiations with the Lions captain have been pretty strong both in Italy and in Portugal, and A Bola should the Serie A side should have some competition from England.

The newspaper says that Arsenal, Crystal Palace, Liverpool, Newcastle and West Ham are all looking for a goalkeeper for the next season, and concidentally, they all follow Patrício.

They give no details on which club could be moving first, and claim that even possible transfers of David De Gea and Thibaut Courtois could create a ‘domino effect’ in the market, making other clubs look for goalkeepers. 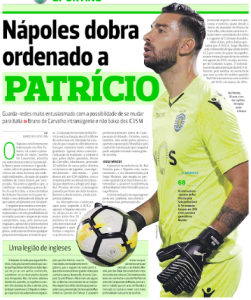 It’s always strange when several clubs are all linked to a player at once, especially if you look at each individual case.

Crystal Palace have just signed Vicente Guaita from Getafe. Newcastle United have the option to make Martin Dubravka’s move permanent at the end of the season. Petr Cech doesn’t look like retiring. And Jurgen Klopp doesn’t seem like he would dump Loris Karius so soon.

Maybe West Ham’s move would be the one making more sense in the next transfer window, with Joe Hart’s loan spell ending at the end of the season.

But for these claims to be more solid, we better wait for some more complete reports about this chase, as it’s still sounding too smoky for now.

Rui Patrício has a €45m release clause, and A Bola believes this auction should start at €30m. Even though the reports from Italy have been very optimistic about Napoli’s approach, the Portuguese newspaper says the Serie A side don’t want to spend more than €20m, which leaves the English clubs in a very favoured position.