West Ham have been brought back into the Leander Dendoncker story, which will please many of the club’s fans who wanted the Anderlecht player signed in January.

Just like Crystal Palace, West Ham made an attempt to sign the midfielder-turned-defender during the winter window, and were knocked back by the Belgian club.

Dendoncker was annoyed, seeing what he believes will be a dream move to England fall to pieces again. He had wanted to move the previous summer and had been linked with clubs including Manchester United and Everton.

Crystal Palace are the club who have been pushed most over the past week or so, with Atletico Madrid and Betis claims somewhat falling away, but Wednesday’s edition of HLN states the Hammers are following the situation ‘closely’ which suggests they could be set for their own swoop.

Slightly worryingly, HLN suggest Dendoncker’s price could be above the €15m it was previously claimed was an agreed exit fee, they even say, half joking, Anderlecht may be tempted to return to their old lofty €38m valuation. 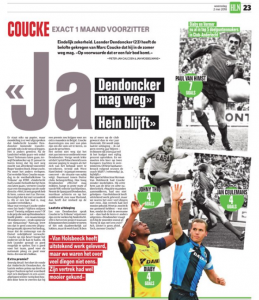 The 23 year old is probably already having nightmares about the summer window.

It’s deadline day, Anderlecht are still holding out for €25m, every club in the Premier League offers €20m. The move collapses at 10pm and instead of planning how he’ll take England by storm, he’s looking forward to facing Beerschot Wilrijk again.