Home Europe West Ham and Everton ‘have been in touch’ with player for free...
SHARE

Perhaps free agency isn’t turning out to be how Yacine Brahimi expected.

Portuguese newspaper A Bola claims today the Porto player is looking for a ‘golden throne’, but is currently having a hard time to find an offer which suits him.

Betis, Everton, Fenerbahce, Olympique Marseille and West Ham are the clubs who have been in touch, but none of them are seen as the perfect destination.

Brahimi is reportedly looking for two things: money and a competitive club.

The problem is, he isn’t getting any of that so far, with the best offer coming from Fenerbahce, who wanted to pay him €3m per season, but his staff wants more. 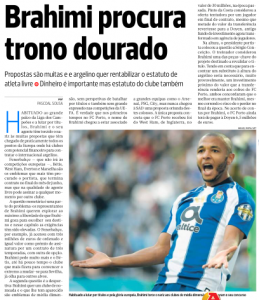 The winger also wanted a destination where he could fight for titles, which isn’t the case in that list, since they can’t even offer him European football in the next season, with neither the Hammers nor the Toffees finishing in the top 6 this season.

A Bola recalls that last summer, West Ham had made a €30m bid for Brahimi, but that was turned down by Porto.

Now the Hammers have the chance to sign him for free, but since they can’t offer him big aspirations, they better work hard on the financial part.