West Brom need to make a move today if they want to sign Ignacio Camacho, otherwise their long term target could be heading to Wolfsburg. Almost moving to West Brom during the last summer transfer window, Camacho saw his transfer collapse very publicly, with Malaga’s president ending a deal.

At the time West Brom didn’t want to pay the player’s €18m release clause all in one go and in a guaranteed chunk, they preferred to send €15m upfront. That’s the same amount Wolfsburg have offered and look set to have accepted.

So what’s changed? Marca believe it could be something to do with the length of Camaho’s contract, which runs out in June 2019. After the failed West Brom move, Malaga went public with claims they’d offer Camacho a renewal and improved terms. 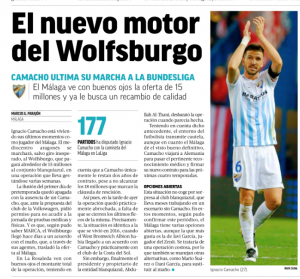 It never happened, and perhaps Malaga have been preparing to sell the midfielder for the past season. They’d prefer €18m, obviously, but will take the €15m on offer believe Marca.

West Brom obviously wanted Camacho last summer, and have been linked repeatedly since, this is perhaps their final chance at stopping a Wolfsburg move and getting Camacho to the Premier League.