There had been a consensus that €30m would be enough to take the midfielder this summer, even though the Lions rejected the same offer from West Brom in the past. But Jornal de Notícias now claims that at least €35m will be needed.

No we go for the good news: Carvalho wasn’t upset about Sporting turning down Atletico Madrid’s offer.

That’s because he actually wants to play for a ‘top English club’, so even if the Lisbon side had accepted the bid, he’s wait a bit longer for the perfect prince to rescue him.

The problem is: Carvalho has been linked to Arsenal, Manchester City and West Brom lately. So unless the Baggies are fighting for European football next season, they will 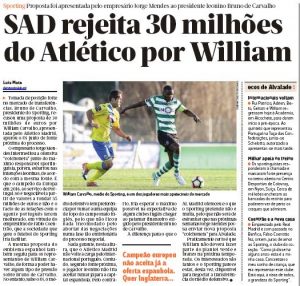 need some good arguments to join this battle.

One of the best arguments they could probably have is that it’s unlikely both Arsenal and Manchester City are interested, and the same may be said for the Atletico claims.

The Portuguese press will try anything to make Carvalho seem as valuable as possible, and West Brom are surely wise to that.