Claims over the weekend that Manchester United could be interested in the 23 year old may well be wide of the mark, but they’ve certainly gained attention.

It will be a bittersweet situation for Sporting, who never really gave the player a chance to succeed with them. They’ll be happy of the €10m, needing all the cash they can get to service debt payments, yet disappointed if they then see West Brom make a quick profit.

A Bola states the Championship club are ‘already aware of future proposals’ for Matheus, which could see them pay the €10m and then bring in a much bigger fee. 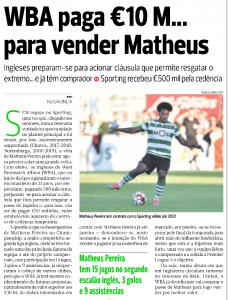 That scenario is now being presented as likely, with A Bola suggesting it’s just a question of whether they let him go in January or wait until next summer.

Given West Brom are well placed for promotion to the Premier League, a winter sale would surely be unlikely, regardless of what is being claimed.