A lot has been made of Chris Smalling’s loan at Roma so far this season, with the Italian side desperate to turn the temporary deal into a permanent one, yet it’s easy to forget they have another player from the Premier League amid their ranks: Henrikh Mkhitaryan.

The Arsenal playmaker was sent to Italy’s capital to get more game time than he would at the Emirates under Unai Emery, and he has played when fit.

The problem is he’s been injured for the best part of two months, but he’s now set for a comeback, and Roma are very much looking forward to his return and the creativity he brings.

There’s a hope he could feature in some shape or form against Brescia at the weekend, but if he doesn’t, Corriere dello Sport reckon he’ll definitely feature in the Europa League next Thursday.

That’s not why we wrote this article, however. 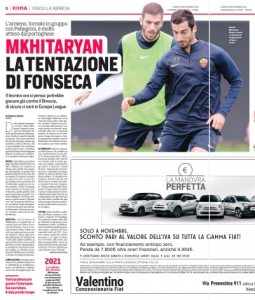 We did it because the newspaper also talk about Mkhitaryan’s future, and compare his situation to that of Chris Smalling.

They state that while Roma are keen to tie down the defender, the club are preferring to ‘take their time’ with the Armenia international, knowing his contract runs out in 2021.

If he performs and they decide to purchase him, it’s believed the Serie A side ‘won’t be faced with an insufferable expenditure’, as Arsenal would probably want to get rid if Unai Emery stays in charge, as all he’d do is return to the Emirates bench.