Despite always aspiring to bigger and greater things, no one can question Mamadou Sakho’s loyalty once he’s at a club.

Not too long ago, the defender gave an interview to RMC Sport in France where he discussed his desire to return to Champions League football, which he won’t get at Crystal Palace.

With the Eagles currently 15th in the Premier League, their chances are slim to pretty much non-existent, meaning a transfer will be needed to realise his dream.

However, there’s no way in the centre-back’s mind he would leave his club in the lurch midway through the season, as he said back then, and as he said more recently in an interview with So Foot, who asked him whether or not he would be tempted by a return to Paris Saint-Germain in the future. 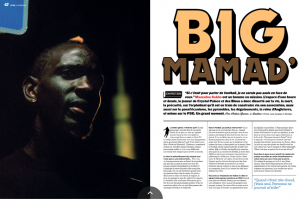 He said: “We’ll see. At the moment, I’m happy in England. My children speak English, I’m learning about a new culture. Crystal Palace made a considerable effort to bring me here, and London is amazing. There’s more people than Paris, it’s really big, really multicultural too.”

The 28-year-old has been ever-present in the Premier League under Roy Hodgson this season, yet to miss a minute of football.

While an exit isn’t something he’ll consider in January, the summer will be very different, as he did make it clear in the RMC Sport interview that he’d ‘sit down’ at the end of the campaign and see what the future held for him.