It’s no secret by now that Lazio are interested in Watford’s Luis Suárez, with tens of articles already on our website covering the subject.

There was a period where not a day would go by without an update from either Italian newspapers or websites, but things have since calmed down a bit.

Corriere dello Sport on Tuesday, however, bring it back to the fore and address the reason why talk about a move for the Watford man has gone a bit quiet.

They start by reaffirming Lazio’s interest, claiming he remains ‘top of the list’ for the Serie A club, but the operation ‘has been put on standby’.

Igli Tare and his staff have ‘studied’ his profile a lot, and while he hasn’t made one appearance in a top European league, Watford want €20m for him. 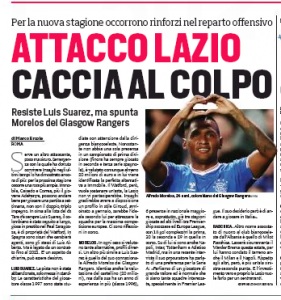 The reason for this is he’s been in great form for Real Zaragoza in La Liga2 this season, and the Hornets ‘want to start a bidding war’ for their forward, something Lazio aren’t interested in taking part in.

That’s where things currently stand with Suárez and his future at Watford, but until the Premier League, Serie A and Spain’s second-tier come to an end, we doubt there will be movement.