Nordin Amrabat should be on his way to Girona.

The Spanish newspaper don’t say whether the agreement if for a loan, permanent transfer, or even a mixture of the two, as is increasingly common, but it’s pointed out Malaga are considering stepping in.

Despite Girona and Watford already agreeing, the potential transfer is being ‘studied’ by Malaga, report Marca, who want to bring in an attacking player. 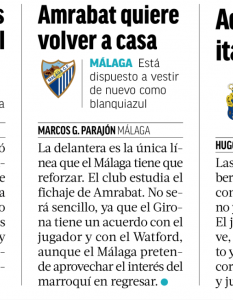 Amrabat played for Malaga before he moved to Watford in 2016, and Marca speculate he quite fancies a return ‘home’.

Spending a season there permanently from 2015-2016, Amrabat had a bigger impact on loan at Malaga from Galatasaray the previous season. Still, it’s a stretch to call Malaga ‘home’.

This could all be good for Watford, whichever club offers them the best terms can take Amrabat.