Moussa Sissoko can’t just lay the blame at Tottenham Hotspur for his exclusion from the France squad, say L’Equipe.

All last season, the French media reported Sissoko was being picked for France despite his relationship with Mauricio Pochettino, and the Tottenham manager not picking him often enough.

But with a reasonable amount of minutes in Tottenham’s first two Premier League games, L’Equipe take the opposite view to the one they usually choose, and say it’s the player’s national form, rather than club situation, which sees him out of favour.

Following France’s defeat to Sweden in June, Deschamps took a lot of criticism for picking older players like Sissoko, getting on a bit at 28, over the younger and more dynamic options.

That criticism has hit home, and Sissoko is out. The same can be said for Dimitri Payet, although he’s been struggling with a hamstring injury anyway. 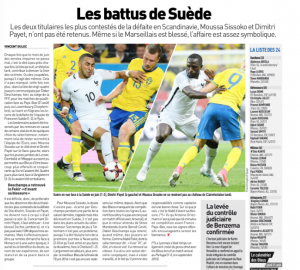 L’Equipe, in words many probably thought the French newspaper would never say, add Sissoko’s ‘playing time in Tottenham is not a problem’.

It all sounds a little knee-jerk. Things can’t all be down to Pochettino’s Tottenham decisions and then not down to them at all.

Sissoko’s situation is a build up of things. Deschamps was under pressure for continuing to pick Sissoko despite his Tottenham exclusion, and the poor Sweden performance has added to that.

Unless Pochettino giving Sissoko minutes in the two first games are a sign of the Frenchman being brought back in, then the France situation adds to the midfielder’s problems.

There hasn’t been an awful lot of attractive interest in the Tottenham player this summer, and it’s in Turkey that he’s most wanted.