As you might have read here or elsewhere, there are a few problems with the signing of Pape Gueye at Watford.

At least, that’s what the player’s new lawyer seems to think, explaining he felt there were ‘possible irregularities’ surrounding the agreement of the five year contract the midfielder put pen to paper to back in January.

In fact, it’s even gone as far as some claiming the player doesn’t want to move to Watford anymore.

L’Equipe on Wednesday go through the timeline of the whole affair, explaining Watford went into action mode ‘as soon as the January market opened’, trying to overtake Valencia in La Liga, and managed to tie the whole thing up by the 15th of the same month.

It’s stated the Hornets staff see him as Étienne Capoue’s successor, appreciating his range of passing and his ability to get out of tight spaces, and the agreement happened ‘rather quickly’ with a ‘comfortable signing bonus’.

L’Equipe are adamant: Gueye is ‘seduced’, since the Premier League is a league he ‘adores’. 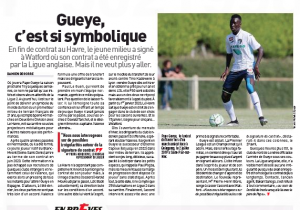 However, they reveal his ‘familial entourage’ feel ‘he could have won much more money by signing elsewhere’, which slowly seeped into the heads of both the player and his father.

This led to them changing agents, with the new lawyer, Pierre-Henri Bovis, ‘thinking about breaking the agreement with Watford’.

That’s where we stand, but since both the FA and the Premier League have accepted the contract Gueye signed, it seems very unlikely anything can be changed.