Just over a year ago, Benfica created a big fuss in Portugal by signing Andre Carrillo from Sporting. One of the arguments that convinced the player to join his city rivals was a big salary, and the transfer was taken with much excitement by the local press.

The problem is, Carrillo was never worth the investment. He only started three league games in the season, and all those newspaper covers were soon forgotten.

That’s why Benfica are looking to offload him this summer, even though there isn’t a big list of pretenders right now. As O Jogo points out, there are a few Turkish clubs who could afford his wages, but president Luis Filipe Vieira believes a move to England is possible and more promising.

It’s Watford who would take him to the Premier League. It’s claimed that the Hornets have already shown interest and the player would be happy to work under manager Marco Silva once again. 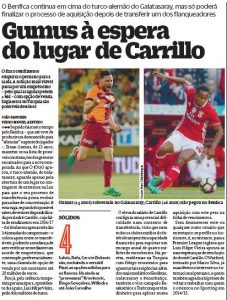 O Jogo claims a loan deal could be made with Watford for €2m, with an option to buy at the end of the season for €20m. And Record also has a story on the player today, this time saying that €1m is enough to have him for a year.

They claim that Watford are indeed leading the race for Carrillo, and take news from the English press to say that Newcastle have recently joined this battle, even though they have no information on this update.