Home Europe “It wasn’t good for me” – Player not happy with Newcastle time,...
SHARE

Matz Sels has admitted his time with Newcastle United was not a good for him.

The Belgian originally joined United in a £6m deal from KAA Gent in 2016 as Rafa Benitez’s first signing at the club.

He arrived as part of a huge summer rebuild by the Spaniard, who was restructuring the club as they looked to bounce back from the Championship at the first time of asking.

Things started well for him in the North East as he started the first nine games of that season.

However, the situation turned as Benitez elected to change things around and Sels found himself sitting on Newcastle’s bench for the next 20 league games before being dropped altogether.

The following season saw him shipped out on loan to Anderlecht before Newcastle made his departure permanent last summer.

He’s now starring for Strasbourg in Ligue 1 and, looking back on his stint in England, admits he was not ready for it.

“I know football: today it works well, but maybe tomorrow, no,” he told L’Equipe. 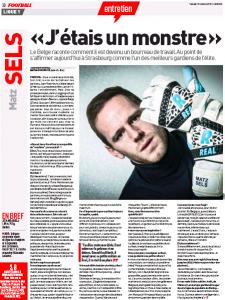 “We must avoid getting big-headed; it can turn against you. I know both sides. I am well now, but I knew hardship in Belgium, and in England.

“After, I never regret a choice. In Newcastle, it was not good for me, but I learned.

Maybe I was not ready for that, just not in my head. I worked, even more, to come back stronger.”