It sounded like a funny story at first, but it seems it’s being taken very seriously in Italy. Arsenal’s Wojciech Szczesny has reportedly been chosen to support and then replace Gianluigi Buffon at Juventus, and things are already moving.

On Saturday, Gazzetta Dello Sport claim the Old Lady are already working on a deal both with Arsenal and the player.

Arsene Wenger’s side are asking for something between €14m and €15m for the goalkeeper, but Juventus consider it too much for someone whose contract expires in an year, and will offer €5m. That’s the biggest issue for now. 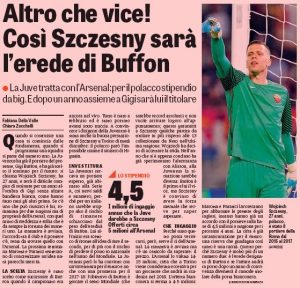 Szczesny’s response is also very important, because it’s not all about the salary. He needs to accept to sit on the bench for one more season, since Buffon wants to keep playing in order to be part of the Italian squad for the 2018 World Cup.

But things are said to be agreed between the Arsenal owned player and Juve, and the salary demands of €4.5m per year are not a problem. He’s ready to go, and only needs Arsenal to allow it now.