Fanatik claim Galatasaray will send two officials to England next weekend to discuss a move for Liverpool’s Xherdan Shaqiri.

The Turkish giants are in the market for a winger in the January transfer window, and they’ve also been linked with a move for AS Monaco’s Henry Onyekuru. However, its reported Gala are looking to bring in Shaqiri in addition to the Nigeria international.

The 28 year old recently returned to the Liverpool side and was very impressive in his first league start of the season against Everton, helping his side beat their local rivals 5-2.

Despite showing promise last night, Fanatik say Galatasaray are still hopeful of getting a deal for the Switzerland international and it’s reported they will open talks with Liverpool next week. 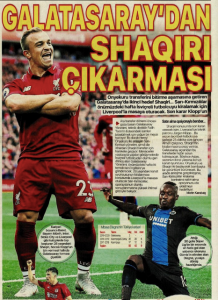 According to the Turkish newspaper, Shaqiri is also open to playing in the Super Lig and the Turkish champions want to loan the player in January, with an option to buy.

The final decision with regards to Shaqiri will reportedly be made by Jurgen Klopp and if the German allows him to leave, Fanatik believe he’ll join Galatasaray.