The 19-year-old started in the Whites’ 1-0 defeat to Arsenal in the FA Cup in January and that’s been his only appearance for the Championship club’s first team.

However, teenager could get opportunities to start for the Whites, if the FA finds the former Real Madrid guilty over allegations of racist abuse.

Casilla will find out his fate before the end of this week and if the decision goes against him, the goalkeeper will face an extended ban.

Meslier’s contract with Lorient is until 2022, but Leeds have an option to make his transfer permanent for €6m in the summer 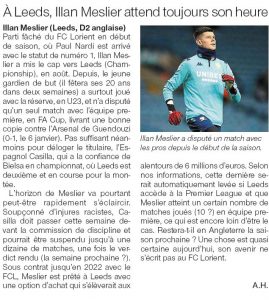 Ouset-France adds the Elland Road club must make his stay permanent if Leeds are promoted to the Premier League and Meslier makes 10 appearances for the first team.

The latter remains ‘far from being the case’.

It’s still not clear if Meslier will be in England next season, but the report states it’s ‘almost certain’ he has no future at Loreint.