Cristiano Ronaldo ended his nine year spell at Real Madrid in the summer and made a switch to Juventus.

Since the Portuguese international’s exit, the Champions League winners suffered a defeat at the hands of Atletico Madrid in the UEFA Super Cup and have won three of their first four league matches.

When Dani Alves was at Barcelona, he played the former Manchester United star multiple times when the two Spanish giants faced each other at least twice every season in the league.

The defender is aware of the forward’s abilities and the Paris Saint-Germain player said that Real Madrid are a stronger side without Ronaldo during an interview with Spanish newspaper Marca. The Brazilian also has an theory as to why the 33-year-old left the 13-time European champions. 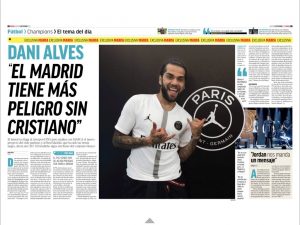 “I do not miss anything in football, people want challenges, continue to feel alive and for that you have to have challenges and therefore it does not surprise me. It’s been a while there, he [Ronaldo] has done great things with Real Madrid and decided to try to do more,” he said.

“I did the same when I was [at Barcelona] and true fighters need new challenges and do not need comfort, I think that, like me at Barça, he was very comfortable maybe, we need to put ourselves out there, feel new challenges.”

Alves played alongside Lionel Messi, when he was at Camp Nou and his comments on Ronaldo could be interpreted as a message to his former teammate to take a new challenge elsewhere.