Rodri left Atletico Madrid and completed a switch to Manchester City after the English champions agreed to pay his €70m release clause in the summer.

The 23-year-old became the Etihad club’s record signing and left Los Rojiblancos a year after joining them from Villarreal in 2018.

Prior to the midfielder’s exit from Wanda Metropolitano, reports from Spain suggested that Diego Simeone and the Madrid based club wanted to offer him a new contract.

Manchester City reportedly offered a deal worth €8m-a-year and Atletico were willing to match it to retain the Spain international. However, Simeone and the La Liga side were unsuccessful in their efforts as Rodri swapped Atletico for the Premier League winners.

Rodri’s former teammate Koke has sat down for a lengthy interview with Spanish newspaper AS and the Atletico star was asked if he was surprised by his compatriot’s decision to leave the club.

Koke said: “We tried to keep him with us. The club went to get him from Villarreal.”

“We made an effort to bring him and then to retain him, but his ideas and his philosophy, as he has explained himself, fits more with the City’s style and we must respect it [Rodri’s choice].” 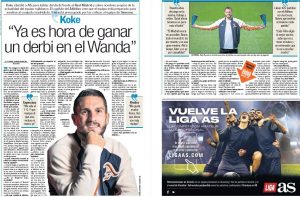 “We have always said we want people who want to be here. It is not an obligation to play in Atlético.”

Rodri came off the bench against AFC Bournemouth, but apart from that, he has started in every Manchester City game this season.