Home Premier League Transfer to West Ham “not a descent into hell”, but not much...
SHARE

Saturday’s edition of L’Equipe has an interview with Alou Diarra, talking about the footballer’s life.

The 37 year old played for fourteen clubs during his varied career. Starting off at Louhans-Cuiseaux FC, he then moved to Bayern Munich and played for their second team. Then a move to Liverpool came, and he was loaned out for his time at Anfield.

Lens, Lyon, Bordeaux and Marseille followed before he signed for West Ham in 2012.

It didn’t prove to be a good decision for the player or the Premier League club, and is certainly a negative which stands out in the former midfielder’s career.

Diarra explained: “At West Ham, it was not a descent into hell: I was coming out of a big Euro 2012, Didier Deschamps left OM, I had nothing to do there. I was very fond of Élie Baup and Franck Passi (who took over), but there were no longer the reasons why I signed at OM. 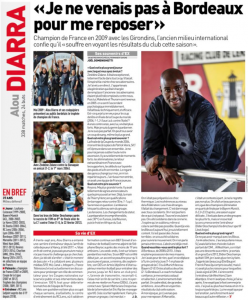 “I met the coach (West Ham), Sam Allardyce. He did not choose me, I knew from him afterwards. He did not see football as I see it. I played at the highest level and I was always talking about playing. He only saw through the transition, without necessarily having much more thought.”

That’s an accusation which has been levelled at the manager on several occasions, but tactics weren’t the only reason Diarra failed to made a success of his time at the London club.