Leeds United attacker Pawel Cibicki has been named one of the best signings in the Swedish league following his loan move to Elfsborg during the last transfer window.

The 25 year old joined Leeds United in 2017 but failed to make a real impact in his time at Elland Road and was subsequently loaned to Molde and then Elfsborg.

Hallands Nyheter have complied a top ten of the best signings from the last winter transfer window, with Cibicki named in 2nd place. The Swede has scored four goals in nine league games for Elfsborg, including a contender for goal of the season.

The Swedish newspaper say the player had to have a hefty rethink with regards to his future in January after an unsuccessful time with Leeds United. 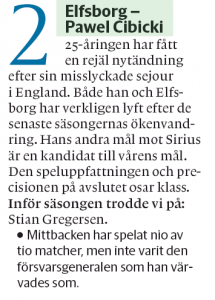 However, during his short time back in his home country they say he’s lifted the gloom of his time in England and also turned the fortunes of Elfsborg.

Danish central defender Marcus Mathisen has been named the best signing following his move from Halmstads to Falkenbergs FF.