The Portuguese media had gone a little quiet on Bruno Fernandes over the past week or so, leaving it for their English equivalents to carry the story forward.

Tuesday saw them jump back into the story, and the claims were as they’ve often been. An offer is expected soon and Manchester United lead the pack to sign the Sporting player.

Wednesday’s edition of A Bola continues that theme, saying the Manchester club are in ‘pole position’ for the transfer.

It’s believed a proposal is now ‘imminent’, and ‘everything indicates’ it will come before the end of the week.

Tottenham are also presented as keen, although not quite so much, and it’s explained Ole Gunnar Solskjaer pressuring Manchester United ‘can make the difference’.

Again, it’s not the first time Solskjaer has been given a key role in this saga, with previous suggestions he’s been pushing the club to hurry up with their recruitment rather than take it a player at a time.

There’s no mention this time of the player’s agent Miguel Pinho, but it can still be assumed he’s sharing his time between Portugal and England trying to build a deal. 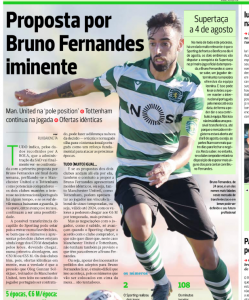 agent’s frequent flights have been a cause of hilarity for some, however, when it’s considered he’s got an office in London and is trying to build a transfer which could be worth €70m then it’s unreasonable to believe he’s doing it sat at home in his pyjamas.

A Bola says that offers from both clubs could initially be around the €50-55m mark, lower than what Sporting want. The Lisbon club are likely going to have set their sights lower than they were earlier this summer.