Malcom’s agent Luis Fernando Menez Garcia met with the leaders of Barcelona on Tuesday and conveyed his client’s desire to leave the Camp Nou, according to Catalunya Radio, as relayed by Mundo Deportivo.

Ernesto Valverde’s side are open to any formula that will benefit both parties. However, they have not received any bids for the winger, and his agent hasn’t turned up with any offer either.

Two days ago, the Express in England carried a report on Arsenal’s interest in the Brazilian.

It was explained the Europa League runners-up want to sign the 22-year-old on a loan deal, while the Blaugrana want to offload him on a permanent transfer and are looking for a fee of around £50m to sanction his sale.

It was claimed an offer had been made.

After the claims made by the Express surfaced in Spain, Mundo Deportivo contacted Barca and sources from the club denied the Gunners have positioned themselves to sign Malcom. 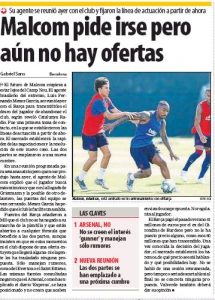 In addition to this, they believe Unai Emery’s side will not send a proposal for the player.

The report clearly suggests Barcelona do not see Malcom playing for Arsenal next season.