We covered claims from A Bola earlier on Wednesday about Tottenham Hotspur making four offers for Bruno Fernandes, all of which have been rejected by Sporting.

Wednesday’s edition of Record reports that at least one of those offers was official, which is significant for the player. Bruno has a clause in his contract which means his camp is entitled to €5m compensation, and a pay rise, should Sporting reject an official offer of more than €35m.

The Portuguese newspaper believe that should Bruno stay, and be due the money, there’s a chance he won’t accept it. Instead, the club captain would be offered a new contract worth €5m a season.

That doesn’t seem like a great temptation to give up a straight €5m, and the pressure for him to comply could be part of the reason he’s being presented as somewhat stressed-out right now.

In a larger article, Record reiterate that Tottenham have offered €60m, and that Sporting are holding out for €70m. Jorge Mendes is currently in England trying to resolve the situation. 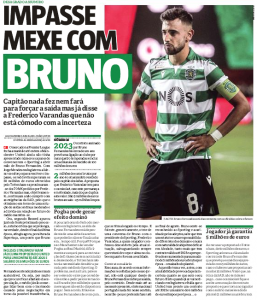 Bruno himself is feeling ‘discomfort’, with it being explained he’s finally had enough and ‘can no longer cope’ with the transfer situation.

That’s not to say he’s forcing his way out, but he’s said to have told Sporting he’s uneasy with how the whole circus is ongoing.