It appears this week could see Tottenham secure their first player of the Fabio Paratici and Nuno Espirito Santo era.

The London club have been after Takehiro Tomiyasu for some time now, and talks with Bologna, where the Japanese defender is currently contracted, are going well.

Two newspapers corroborate this on Tuesday, and we’ll start with the local Corriere di Bologna.

Not mincing their words, the outlet make it clear ‘this week will be important for the sale of Takehiro Tomiyasu to Tottenham’, as the ‘definitive offer will arrive’ and it should ‘satisfy almost all the requests’ put forward by the Serie A side. 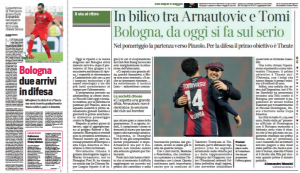 Corriere dello Sport then add their own bit, stating the operation taking the defender to Spurs is ‘very hot’, firstly because both sides ‘really want to get it done’ and secondly due to the fact the player has ‘already given his blessing’ for the move to London to happen.

All that’s left, for them, is for the two clubs to ‘define the entity of the bonuses’, as the ‘fixed part’ of €20m has already been agreed on.