It’s clear this summer that Tottenham will not be holding back, Daniel Levy has opened the chequebook for Mauricio Pochettino to invest in the squad.

Tanguy Ndombele has already arrived in a club-record deal and is likely to be the first of several high profile recruits.

One player heavily linked is Giovani Lo Celso, with Spurs having been in contact with Real Betis over a move for the Argentine since the end of last season. In fact, they’ve already offered the player a ‘succulent’ deal.

However, a deal is yet to be agreed, with Spurs yet to match Real Betis’ asking price, which it has been established is €75m.

Diario de Sevilla provide an update on the situation today and state that’s a price Tottenham are unlikely to match at this point.

The newspaper states Spurs are standing firm on a €50m offer at this moment in time, despite making it clear earlier in the window they were willing to go close to €60m for the player. 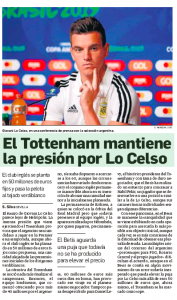 Daniel Levy has reportedly changed his stance because of the arrival of Tanguy Ndombele and the fact that Christian Eriksen, who was expected to leave White Hart Lane, is yet to do so. There haven’t been any concrete offers for the Danish midfielder.

Likewise, Nabil Fekir’s arrival at Betis ‘does not go unnoticed’ suggesting that Levy wants to use that, and the fact that the Frenchman plays in the same position as Lo Celso, suggesting Betis need to sell the latter, to Tottenham’s advantage.

The newspaper explains that Betis are comfortable at the moment, although there is a ‘growing awareness’ that it will be difficult for them to get the €75m they want. They are, however, confident that Spurs will go beyond their current €50m price at some point.