Tuesday’s edition of Marca reports Sevilla know they need to get a move on with transfers, and before the hoped for incomings… sales must come first.

The Clement Lenglet to Barcelona move is dragging on, and then there’s Steven N’Zonzi, who ‘only wants to play in the Premier League’.

It’s more specific than that, N’Zonzi would pick out a move to London if he had the choice, with the capital city being his clear preference.

Arsenal are mentioned, but their interest isn’t presented as serious yet, and the club’s recent purchases may well have a lot to do with that. Then there’s Tottenham, who are said to be ‘waiting’ to make their move.

Sevilla expect an offer over €30m. 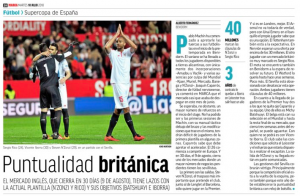 Tottenham interest and how it’s presented is intriguing, because just a few days ago Corriere dello Sport, reporting on Inter Milan’s pursuit of Mousa Dembélé, claimed Mauricio Pochettino has requested N’Zonzi as a replacement.

N’Zonzi and Dembélé will both be at the World Cup in Russia until either Saturday or Sunday.