Corriere dello Sport have a bit of a weird one on Thursday, claiming Mauricio Pochettino has requested Tottenham to replace Mousa Dembélé with Steven N’Zonzi.

This, as you may have guessed by now, would be ideal for Inter (hence why they’re running the story), as the Serie A club have had their eye on the Belgian midfielder to bolster their squad all summer.

Primary discussions between the two sides have already taken place, but with the player’s desire to wait until after the World Cup to sort out his future, the deal is on standby.

In the meantime, Spurs have been linked with a number of midfielders, including Lyon’s Tanguy Ndombélé, but N’Zonzi is a bit of a new one.

Tottenham have been linked in the past, sure, but this is the first time we’ve seen them strongly named alongside the Sevilla man recently. 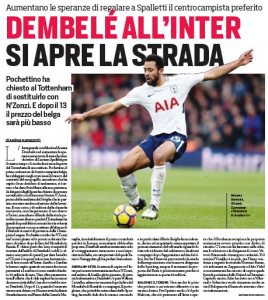 Far easier to obtain than the 21-year-old Ligue 1 starlet, the France international has a €40m release clause in his contract with the La Liga side, which, should they sell Dembélé for anything close to Daniel Levy’s €30m asking price, wouldn’t cost them all that much.

Pochettino is said to view N’Zonzi as the ideal man to replace the departing Belgian, but Inter are willing to wait until after July 13th to make their move.

The reason for that, other than the fact the player is in Russia with his national team, is the date represents the Chinese Super League’s transfer deadline day.

Tottenham are believed to have received a €30m offer from China for Dembélé, with the player yet to give an answer.

Should he turn down the opportunity to move East, then Inter would be in a stronger position to try and negotiate a lower fee with Daniel Levy.