Barcelona have André Onana’s name on the table, claims today’s edition of Sport.

The Ajax goalkeeper, who spent five years at the Catalan club’s academy, would be open to the idea of returning to Barca. However, the La Liga winners are not the only side looking at him.

It’s claimed the 24-year-old is ‘probed’ by Tottenham Hotspur and Spurs are ‘very interested’ in the Eredivisie keeper.

Onana’s current deal at the Johan Cruyff Arena lasts until 2022 and the Dutch champions are aware the player ‘wants to leave’ them.

The newspaper states Ajax have set a valuation of €40m, but they are ‘open to negotiate’.

Even though the north London club are ‘very interested’, Sport provides no information on whether or not Tottenham are willing to convert their interest into a bid for Onana. 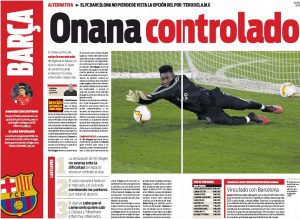 If José Mourinho’s side decide to submit an offer, they may not be given first preference because Onana’s desire is to join Barcelona.

Tottenham currently have Hugo Lloris, Paulo Gazzaniga and Michel Vorm as the three goalkeepers in their squad. The latter’s contract with the Premier League side expires in the summer.