Inter Milan are keeping an eye on Tottenham defender Jan Vertonghen and may make a move if he doesn’t sign a new contract this summer.

That’s according to Tuttosport, who say the Belgian is of interest to the Serie A side should he be available on a free transfer this summer.

Vertonghen’s contract with Tottenham expires at the end of June and according to the newspaper, ‘does not seem willing’ to continue in London.

That’s caught the attention of Inter, who have not discarded the ‘hypothesis’ of ‘going fishing for a zero parameter’ in the summer window. 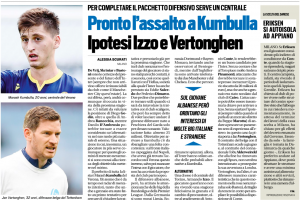 Vertonghen fits the profile of defender they would like to sign as he is a left-footed defender, a quality they admire ‘among other things’.

The only left-footer in that position at the club at present is youngster Alessandro Bastoni, so they are looking for further additions with that in mind given Antonio Conte’s preference for a back three.

Whether Vertonghen would be keen on the move isn’t mentioned, although, after eight years at Tottenham, it’s hard to see how a move to Italy would not be appealing, just as it was for Christian Eriksen in January.