Diego Simeone’s son, Giovanni, is attracting a lot of interest, and there have been a few claims that Tottenham were in the mix.

We covered one last week, with Calciomercato suggesting Spurs were ‘thinking about’ the Argentina international, but speculated these claims probably originated in England before making their way to Italy.

However, Corriere dello Sport have decided to continue this trend, claiming on Thursday that both Tottenham and Barcelona are ‘on his trail’.

This merely suggests they’re keeping track of what he’s doing, but nowhere does it say they are intent on ‘constantly following’ him over the course of the season, as has been posted elsewhere. 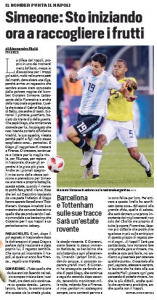 While not the tallest, the striker’s dogged determination and eye for goal would make him an interesting backup for Harry Kane, giving Mauricio Pochettino a different option to the England international.

So far this season, the 23-year-old has scored one goal and provided an assist in two games, continuing his great end of season form from the previous campaign, when scored four goals in his last four games.