Ever since it was made clear that Paulo Dybala wouldn’t be renewing with Juventus, Tottenham have been linked with a move for the Argentine.

That’s because Fabio Paratici was the one who signed him for the Turin side, but also because it’s been made clear that Antonio Conte is a fan of the playmaker, respecting what he’s done to date.

The last few days have been a bit more quiet, but Corriere dello Sport explain why, as the player’s agent is ‘now in England for a recon lap of the Premier League’.

Despite him rejecting Tottenham ‘at the last minute’ back in 2019, it could be different this time, as a move to Spurs is seen as a ‘valid track today’. 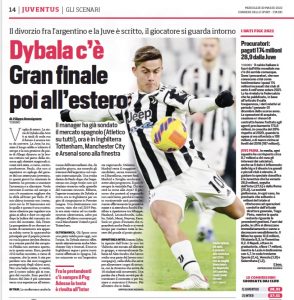 That being said, it seems that a move to Spain could be the player’s preference, as Atlético Madrid ‘remain the main candidate’ for his signature.

If that is the case, it will now be down to Paratici to work his magic a second time around, and make it clear to Dybala that a transfer to Tottenham would be the best decision for his career.

How he does that remains to be seen, but with the agent currently in England, it could be now or never.