Thursday’s edition of L’Equipe has a hefty transfer special, and there’s plenty of involvement for Premier League clubs.

The route from Ligue 1 to England is well used, and expected to be again this summer.

Tottenham often feature in French transfer stories, so it’s no surprise they play a part in the special.

Covering potential PSG sales this summer, L’Equipe explains the club needs to make €30m from sales before the end of June, this is to balance their accounts and make sure there’s no FFP issues. They’ll have to raise more after that to help with sales, but minds are now concentrated on the first task.

Selling Julian Draxler, for ‘at least €40m’ would ease the issues, and Tottenham are said to have ‘taken the temperature’. That sounds like Spurs have asked for information on a potential move, perhaps from the player’s entourage. 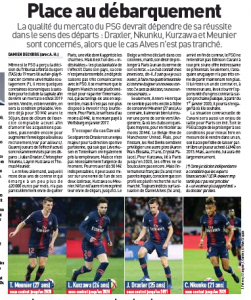 Bayern Munich are pushed forward as potentially interested, whilst Bayer Leverkusen are put in the same situation as Tottenham.

Draxler likes living in Paris and would prefer to stay, but his club may have other ideas. When a price is stated as ‘at least’ something, in this case €40m, the assumption would always be that the stated figure would be enough.