L’Equipe have an article today which they say covers the last 36 hours of Tanguy Ndombele’s move to Tottenham Hotspur.

Before diving head first into it, it’s worth noting what the same newspaper reported on Monday morning.

L’Equipe said the transfer wass ‘imminent’, and explained ‘all that remains’ is to ‘finalise the transaction’.

Now they seem to have it rather differently.

The report states that when Ndombele arrived at Tottenham on Monday morning with his agents, he was far ‘from suspecting that he would commit’: ‘Yes, the Lyon midfielder, since last week and a new dialogue with Mauricio Pochettino, the coach of Tottenham, had almost decided in favour of Spurs but this two-hour trip to the English capital had to validate his decision. And not necessarily lead to an immediate signature. A sign that Ndombele did not expect it is that he left for London without taking specific clothes for the official photo.’

It’s claimed that Juventus had already found a general agreement with the player, but Tottenham pushed harder at the end. At this point it’s worth noting that there’s no glaring need for such a player at the Turin club, and they’ve been closing a deal with Adrien Rabiot, yet another midfielder, for quite a while.

Anyway, Pochettino charmed Ndombele, with L’Equipe making it sound like the manager had a job on his hands.

It’s worth noting that on June 26th, the French newspaper claimed the player had already travelled to Tottenham’s facilities, and returned to France ‘convinced’.

At the time they explained: ‘But what has marked the French international is more the dialogue with Mauricio Pochettino than infrastructure as such.

‘The Argentinian technician, who speaks French, has convinced Ndombele of his future project. And the high ambition: the construction of a team able to afford the title of champion of England next year. The player, who appreciates the Premier League, is therefore convinced that this stage can feed his express progress. And give him a chance to change status in Blues in the perspective of the next Euro.’

To be clear, they used the French word for ‘convinced’ twice and also said the player had been ‘persuaded’ the move was right for him.

Today’s newspaper says Pochettino had to be helped with his French by assistant Miguel D’Agostino.

Manchester United get a mentioned again, with it being stated the club had asked Ndombele to ‘wait’, so they could ‘settle the case with Paul Pogba’.

On Sunday, L’Equipe had stated there could be a ‘surprise’ from the Manchester club, but didn’t sound at all convinced in the claim.

Leaving competition behind, Daniel Levy is then brought into today’s story: ‘The boss of Tottenham is never better than when he brawls. After several days of discussions, Levy convinces Jean-Michel Aulas last weekend. We must now complete the contractual agreement with the agents of the player: Mounir Sidhoum and Romain Fernandez. And from the first hours, the boss of Spurs sets the course: “You will not leave without having signed with us,” he slips into a smile tinged with challenge.’ 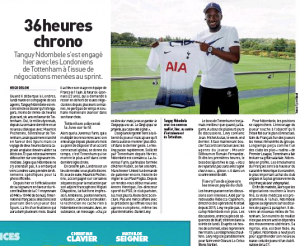 There’s then some more drama added in about talks, and it’s stated: ‘The phones heat up: Levy negotiates in parallel to bring Giovani Lo Celso (Betis Seville).’

L’Equipe aren’t clear, but if they mean Lo Celso was an alternative to Ndombele it doesn’t make a great deal of sense, they’re not exactly carbon copy players. Perhaps this is another signing for Spurs fans to get excited about.

It does feel very much like some soap opera has been added to this story, especially given what the same newspaper has previously reported before about the very same transfer and the same talks.