Home Europe Tottenham ‘in the running’ for midfielder – Club ‘willing to do business’...
SHARE

Tottenham are ‘in the running’ for Sporting Club de Portugal midfielder Joao Palhinha, who can be signed for €30m this summer.

That’s according to Correio da Manha, who say the Portuguese club are willing to do business for half of the player’s €60m release clause.

They explain that the midfielder’s recent call up to the Portugal squad could be the ‘catalyst’ for a move away this summer.

He has a number of suitors, including Tottenham, but none are yet to make a definitive move, something which could change if he gets minutes for Portugal.

The player understands that now is the time for him to try an adventure abroad, and the Lions are ‘willing to do business’ for €30m. However, their star man will not be sold for a ‘bargain price’ under any circumstances. 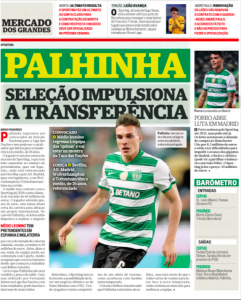 The hope is that if he is used by Portugal in the Nations League, and they can secure good results in their games, it may ‘arouse the interest’ of more clubs and get the market moving.

Either way, Sporting need to secure a transfer to balance the books and be able to bring in new players to improve the squad.

That is why now is the time to move on, Palhinha, with Tottenham firmly in the race but not his only suitors.