Tottenham are ‘pressing’ to sign Roma midfielder Lorenzo Pellegrini this summer, but a deal looks hard to get done.

That’s according to Gazzetta dello Sport, who say it’s unclear whether the player would want the move to London.

They cover Tottenham’s interest in the midfielder in a piece about a potential move for Granit Xhaka, which has been in the offing for several weeks.

Roma are keen but don’t have the money, at the minute at least, to satisfy Arsenal’s €20m demands for the Switzerland star.

They could be helped on that front by departures from the club, and amid the interest in players they want to get rid of, there is also a suitor for Pellegrini.

That is Tottenham, who the newspaper say are ‘pressing’ to try and make a deal happen this summer.

There is no mention of a fee, but it’s made clear that the player has a €30m release clause in his current contract. 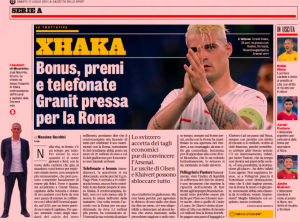 Roma, though, are said to be ‘blocking’ and ‘resist’ the move, which would suggest that Tottenham are offering a price below that figure and haven’t actually activated it.

They’re not keen to sell, and it’s not even clear if Pellegrini ‘likes Tottenham’ as a destination should he leave Roma this summer.

Indeed, they suggest that it would be better for all parties to ‘secure him with a new contract’, presumably removing the release clause and thus any doubts about his future in one fell swoop.

That hasn’t happened yet, though, and it seems Tottenham are looking to take advantage, although whether they’ll activate that €30m clause remains to be seen.