In Tottenham Hotspur’s last league tie against Wolverhampton Wanderers, Mousa Dembele collided with Helder Costa early in the game, which saw the former leave the pitch after seven minutes.

After the match, Mauricio Pochettino admitted he is unsure as to how long the 31-year-old will be out of action, and the midfielder went on to miss the north London club’s Champions League victory over PSV Eindhoven.

Dembele has suffered an ankle injury and today’s edition of Belgian newspaper Het Nieuwsblad has an update on the former Fulham man’s latest setback.

It is claimed the Spurs player is expected to be out of action for the next six weeks, meaning he will not be part of the Belgium squad for November’s international break. 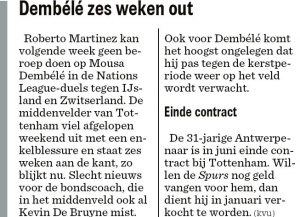 The report mentions Dembele is only expected to be back around Christmas, meaning he will miss Tottenham’s crucial fixtures against Inter Milan and Barcelona in the Champions League and Chelsea and Arsenal in the Premier League.

Tottenham confirmed that a break had been ruled out, but there had been early worry in Belgium of ligament damage.

Ferguson said to have spoken to defender over move to Manchester...