Home Europe Tottenham player unlikely to get call-up, even though rival may be ostracised
SHARE

After playing two matches against Germany and the Netherlands in the UEFA Nations League, France will once again face Joachim Low’s side in the same competition after the friendly tie against Iceland later this month.

The Bayern Munich midfielder Corentin Tolisso was part of Les Bleus’ World Cup winning squad, but the 24-year-old ruptured a cruciate ligament in his right knee in September, meaning he will be forced to miss the upcoming international break.

French newspaper L’Equipe looks at the options available for Didier Deschamps and that is when Moussa Sissoko of Tottenham Hotspur’s name has been mentioned. However, the former Newcastle United man is returning from injury and he has hardly played in the league this season.

This is why it will be difficult for the Spurs player to receive a call-up for France even though Adrien Rabiot is still unlikely to be considered after he decided against being part of the reserve list for the last FIFA tournament in Russia.

The report looks at other options and the list includes the likes of Lyon midfielder and Manchester City target Tanguy Ndombele, who looks like a favourite to fill Tolisso’s place in the France squad. 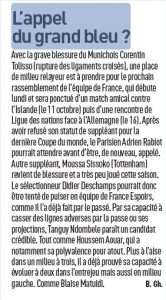 Another Lyon player, Houssen Aouar, has also been mentioned as he can play in more than one position in midfield and looking at the options available for Deschamps, it looks like Sissoko’s chances of returning to the national team are very slim.

On the bright side, at least he’s still being mentioned as a possible.