Home Premier League Tottenham player has ‘understood for several weeks’ he won’t be important under...
SHARE

That’s according to L’Equipe, who say the 31-year-old has ‘understood for several weeks’ he won’t have an important role to play under the former Wolves manager.

The midfielder started to see his appearances restricted in the second half of last season and despite the limited game time with Spurs, Didier Deschamps still included him in the France squad for Euro 2020.

With a contract expiring in 2023, Sissoko is aware he is at a ‘pivotal moment’ in his career, and to change clubs, his options are limited.

So far, the former Newcastle United man has had enquires from the Middle Eastern clubs, but he doesn’t favour a move there.

Therefore, it’s possible the player will continue at the north London club, where he will have to battle it out with several players for regular game time. 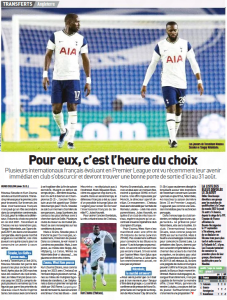 Sissoko’s compatriot Tanguy Ndombele also has his future uncertain and L’Equipe add Spurs have indicated that if an ‘opportunity presents itself’ for the former Lyon man, they will study it.

Ndombele, like Sissoko, doesn’t seem to be in Nuno’s plans at Tottenham this season.

The French duo could improve their situations by getting themselves a move away from the Premier League side, but now have less than two weeks to sort it out.