In news which will come as a blow to much of the Danish sport media, Marca claim Christian Eriksen has seriously slipped out of the picture at Real Madrid.

Earlier this summer the Tottenham player spoke publicly about possibly leaving the Premier League club, and did a little flirting with the Spanish side at the same time.

That was obviously covered in Spain but it didn’t take off as much as the player perhaps hoped it would.

Zinedine Zidane isn’t thought to be a fan.

His big summer priority for midfield has been Manchester United’s Paul Pogba, with Eriksen for a long time seen as the plan B option.

Now, he’s not even that. 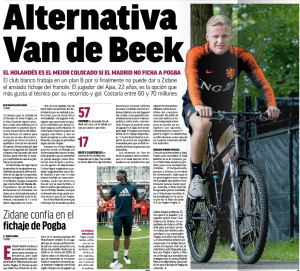 Wednesday’s edition of Marca explains the Spurs man has fallen behind others, such as Ajax’s Donny van de Beek.

Zidane doesn’t believe the Tottenham player is what he’s looking for, thinking he ‘lacks the punch’ required.

Therefore, the 27 year old ‘loses strength’ as even a back-up summer option.