Home Europe Tottenham have opportunity to swoop in and do transfer at €40m, Poch...
SHARE

Tottenham are once again credited with interest in Jean Michael Seri by Mundo Deportivo on Wednesday. Mauricio Pochettino has repeatedly been listed as interested in the Nice player, and if there’s anything truthful in the claims, which have been going on for some time, then right about now is the time to move.

Barcelona are also being repeatedly linked, and whilst we’re not suggesting Tottenham can out-muscle the Catalan club, and be a bigger attraction to the player, they probably can outmanoeuvre them.

Firstly, new Barcelona manager Ernesto Valverde hasn’t even given his approval to the player being a target yet, report Mundo Deportivo. Secondly, Barcelona aren’t prepared to match Nice’s asking price of €40m.

Seri was arguably the best midfielder in French football last season. He’s 25 years of age, €40m is very reasonable, but Barcelona believe Seri has a clause allowing them to buy him for less than half that amount. 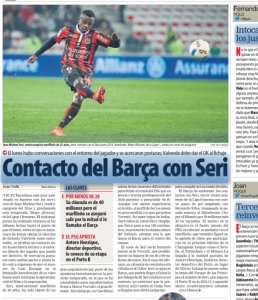 There would be some doubt over the actual existence of that clause, which presents Tottenham their window of opportunity. If Pochettino wants Seri, for whatever reason, then now is the time to be bold and go in with the money.

Yes, it would be out of character for Tottenham, but, let’s face it, so too would winning something next season.

It may result in failure but it’s better to fail in early June than as the window is closing in August.