On Tuesday we covered Jann Fiete Arp’s situation at Hamburg and how the young striker is being presented as likely to leave should the club be relegated.

Tottenham have been the English club most linked recently, with claims going back several months of contact being initiated on a potential transfer. Everything seemed to be falling into place for Spurs, and we said all the stars were aligning for a deal to be done.

Things take another step forward on Wednesday, with SportBild having a two page spread on Arp potentially moving to Tottenham in the summer transfer window.

It’s again stated a Hamburg exit is likely for Arp should relegation happen, and Tottenham are once again said to be keen. The Premier League club will ‘now intensify’ their efforts to sign the 18 year old striker, and it sounds like he’d welcome the destination should he decided to leave HSV.

SportBild say Arp has been a Tottenham fan since childhood, which wasn’t so long ago, and Spurs are his chosen PlayStation team. 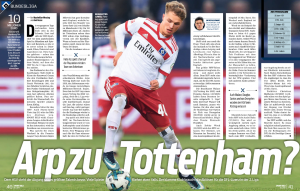 The player’s agent Jürgen Milewski is said to have good contacts in England, and it’s pointed out he took Leroy Sane to Manchester City.

SportBild believe the transfer would be at around €10m or more, slightly more than the market value Bild put on Arp.

This is a story which refuses to disappear in Germany, and Arp to Tottenham is a transfer rumour gathering some speed.