Tottenham Hotspur are in the race for Barcelona right-back Emerson, according to reports today.

It’s Portuguese newspaper Record who has a story on the 21-year-old, mostly claiming that Benfica are currently interested in him.

They say the Eagles wouldn’t have an easy path to signing the Brazilian, since there’s a big contest. Besides Spurs, other clubs in the race are Bayer Leverkusen and Inter Milan.

Emerson is currently having a loan spell at La Liga side Betis. Barcelona received €6m to let him go last summer and keep him at the Sevilla side until 2021. 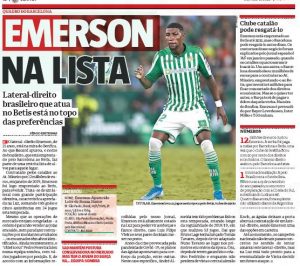 Despite saying Emerson is on Benfica’s wishlist, Record says the Eagles are still to make a move to sign the player.

Barcelona paid €12m to sign him from Atletico Mineiro last summer. According to reports from Spain, for the Catalan side to cut short the loan spell with Betis, they must pay another €12m to their La Liga rivals.

Reports in Spain have put that figure at €6m.

Emerson wouldn’t be a cheap player to buy this year, even for Premier League clubs like Tottenham.