“I started sweating at the idea of starting a game without him”.

Those were Martin Jol’s words earlier this month about Mousa Dembélé, the Tottenham midfielder Mauricio Pochettino recently labeled a ‘genius’, comparing him to Ronaldinho in the process.

Over the years, the Belgium international has played pretty much everywhere in midfield, even spending time up front for AZ, but it’s the role Martin Jol gave him that really made him the player he is today.

Speaking to Sport/Foot in his home country, the Tottenham midfielder explained how the position shift came about.

He said: “I used to play at 10, but at one point, the system changed and Martin Jol called me into his office and asked me what I thought about playing a bit further back. He felt it was the ideal position for me because I could show my defensive qualities while regularly contributing offensively.”

His initial reaction to the request? Very positive. 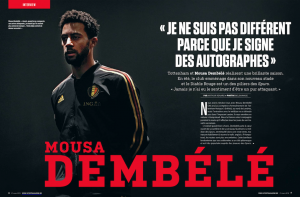 He continued: “I was open to it straight away. In fact, I was even happy. I’d already thought about that role. It’s easy to say now, but I never felt like a pure forward. I was quite performant up top at AZ, but when I compared myself to my colleagues, I felt they wanted to score more than me.

“I was already happy giving them the assist. As soon as I played between the two, it felt more natural, I was more at ease. It made more sense.”

That’s when the now 30-year-old Tottenham player really burst onto the scene, always being in the game, touching the ball often rather than having to wait for it as he would do playing further up the pitch.

Never having a career plan, unlike a lot of players, has also been a huge plus for the midfielder, never forced by his parents to do something he didn’t want to, even if it meant potentially turning down a lot of money.

He said: “I’ve always thought about pleasure and happiness. The main goal was to do what I loved doing. My family don’t care if I earn a lot of money or not, and that’s great.”

As much as he loves football, Dembélé doesn’t see a future in it beyond his playing career, and made that very clear.

When asked about it: “No chance. You won’t see me back in football anytime soon. I’m not excluding it 100%, but even at 18 I was already saying that I wouldn’t stay in the business when my career ended. I still say it. Not as manager, not on the TV or in any other role. But you never know. Maybe I’ll change my mind in three to four years time.”