Matthijs de Ligt is attracting interest from top clubs across Europe and is contracted to Ajax until 2021.

According to the Catalan newspaper Mundo Deportivo, Tottenham Hotspur, Manchester City, Manchester United, along with Barcelona and Bayern Munich have shown their interest in signing the defender.

Mundo Deportivo say they’ve had it confirmed that those clubs are making moves for the player.

Though he has three years left on his current deal, it’s stated De Ligt had earlier agreed in principle to continue for one more year. However, that has changed now and the centre-back has “officially requested” Ajax to allow him to leave the Dutch club in the summer transfer window.

His decision to leave the club in the summer is believed to be against the interest of his current employers. De Ligt has also asked the Amsterdam club to put a price on him, so that other clubs can negotiate with Ajax.

If anyone is wondering why there has been a change in the player’s decision to leave this summer, then one cannot rule out the influence of Mino Raiola. Former Dutch international Barry Hulshoff is currently managing De Ligt, but Raiola will manage his potential exit from Ajax.

The agent also manages De Ligt’s teammate Justin Kluivert. The latter also could leave the Eredivisie after the end of the season. Ajax are now concerned with Raiola’s influence on several players at the Johan Cruijff Arena. 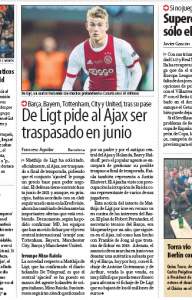 Tottenham aren’t one of the clubs most thrown into the De Ligt situation, with some of the others seeming to be there out of rumour habit. Having signed Davinson Sanchez from Ajax last summer, there’s a good chance Mauricio Pochettino is well aware of his former teammate.

With Toby Alderweireld have expected to leave this summer, and Jan Vertonghen the wrong side of 30, interest in De Ligt wouldn’t seem odd.