Bournemouth’s interest in the Porto defender Diogo Queirós has been confirmed by the Portuguese media this Thursday.

With the chase being reported by The Guardian this week, Lisbon newspaper A Bola had a look at the story, and now says the Premier League side are indeed keen on the youngster.

The outlet claims that Bournemouth are interested in spending €11m on the player, but don’t really have details saying if it would be enough to convince Porto or not.

However, there’s interesting information on the race, and that’s about the Liverpool competition that Eddie Howe’s side is about to face. 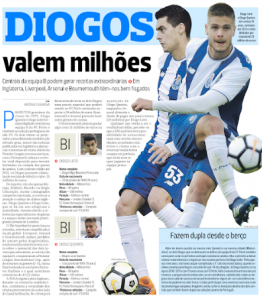 They claim that Liverpool are interested in Diogo Queirós and Diogo Leite, willing to pay €20m for both.

With both players worth basically the same amount, and Arsenal liking Leite too, that’s not good news for Liverpool. Putting two and two together, that should mean that Bournemouth would be offering more for Queirós, giving the club an advantage.

But with a lot to happen in the transfer market, let’s see how things develop. For now, it seems that Bournemouth are well placed in this race.