Spurs are on the hunt for a new striker this month after losing Harry Kane until April with a hamstring injury.

They have been linked with several forwards as a result, and according to El Diario Vasco, the latest they have targeted is José.

The newspaper reports that Tottenham have informed Real Sociedad of their interest in the 28-year-old and have already made an offer for the player.

They are yet to make that official with the Spanish club, though, and the belief from La Real is that they will not be willing to match their asking price anyway.

The La Liga side are not keen on losing their first-choice striker, and this was made clear by the club’s president Jokin Aperribay last week. 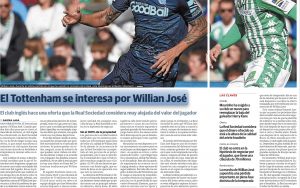 It’s stated that they ‘do not enter into the hypothesis of negotiating’ with Tottenham for José, while Tottenham’s are ‘far from the value’ of the player anyway.

José has a contract until 2024, and that contains a €70m release clause, so that would be Sociedad’s asking price in any deal, and they are uncertain whether Tottenham would ever be willing to match it.

At the moment it appears that isn’t the case as their current bid is ‘not equal to the quality of the Brazilian striker.’