Layvin Kurzawa is unlikely to continue with Paris Saint-Germain beyond this season following his “break-up” with coach Unai Emery and the French capital club.

According to the French newspaper Le Parisien, the left-back has grown frustrated and could leave the Parc des Princes this summer.

Kurzawa has set his sights on making a switch to the Premier League in order to showcase his worth. Tottenham Hotspur, Chelsea and Liverpool are believed to be “studying the profile” of the player.

Chelsea have been repeatedly linked, but Le Parisien state that’s conditional on them selling a left back this summer.

Kurzawa has 20 Ligue 1 appearances to his name and earlier expressed his unhappiness with the number of games he has played for PSG this season.

“I’ve never been happy with myself this season. Every time I went back home, I was angry,” Kurzawa told PSG’s official website in April.

Le Parisien states is keen on a move to the Premier League, but they don’t detail any offers. 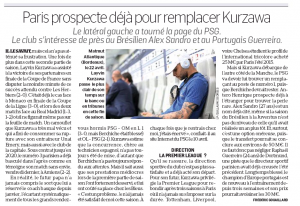 Tottenham, Chelsea and Liverpool are only looking at his profile. There is no mention of firm efforts from any of these clubs in signing the player.

Tottenham, like Chelsea have been repeatedly linked, but Liverpool not so much.